Defibrillation has a surprisingly long history, with experiments in cardiac recovery in both animals and humans stretching back nearly to the first harnessing of electricity in the mid-eighteenth century .

Fibrillation, or very rapid irregular contractions of the muscle fibers of the heart resulting in a lack of synchronism between heartbeat and pulse, has been an observed phenomenon for at least two centuries, and scientists were quick to ascertain the link between this condition and electricity. In the nineteenth century, the Royal Humane Society commissioned one of the earliest studies into the use of electricity to prevent death from fibrillation and the techniques which they described and recommended look uncannily like contemporary interventions. 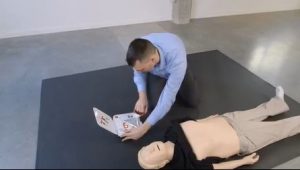 “When the several measures recommended above have been steadily pursued for an hour or more, without any appearance of returning life, Electricity should be tried… Moderate shocks are found to answer best, and these should, at intervals, be passed through the chest in diﬀerent directions, in order, if possible, to rouse the heart to act.”

The middle of the twentieth century, especially the period during and post World War II, saw the emergence of standardised and mass produced internal and external closed chest defibrillators. American scientist William B Kouwenhoven, having spent his college years as a labourer wiring houses for the transition to electric power, observed the relatively frequent phenomenon of workers dying from fibrillation induced by electrocution. His interest in the connection between cardiac function and electricity remained with him as he entered Johns Hopkins University and eventually led to the most fruitful of the many research projects associated with defibrillation which have taken place over the last few centuries . It is largely to Kouwenhoven that we owe the modern external defibrillator .

This long and storied history demonstrates that defibrillation is a mature and demonstrably effective form of medical intervention. Beginning as an experimental conceit associated with Romantic Triumphalism’s quest for immortality , and developing into a serious life-saving pursuit tested first in the Royal Humane Society’s mission to eradicate preventable deaths , and then later in the crucible of World War II, when hospitals evolved into their final form as venues for critical health intervention , defibrillation and its associated technologies have been repeatedly refined and proven over a period which spans several centuries .